Voices from the Forest 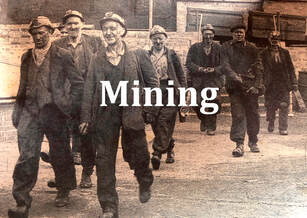 Coal mining had superseded iron mining (and iron works) as the main Forest employer by the turn of the nineteenth century, and by 1945 it employed half the male population. Although after the Second World War its decline began to accelerate, in 1958 the National Coal Board was still the largest Forest employer with more than 25 per cent of the male workforce. Excessive water, steeply dipping and narrow seams, and cheap imported coal eventually brought the Forest's mining industry to an end ten years later. There was some short-lived attempts at opencast mining, for example at Steam Mills and Yorkley in the later 1960s, and during the late 1970s at Woorgreen.  Meanwhile the Coal Industry Nationalisation Act of 1946 had specifically exempted the Forest of Dean, due to its unique form of ownership and history, allowing Freemining rights to continue intact. A number of small pits and levels were worked privately under grant from the Deputy Gaveller. In 1975 there were 50 active Freeminers in the Forest (most having full-time jobs elsewhere). In 1992, with electricity generating stations the main customers for their coal, 7 mines were operating, 4 providing full-time work for 11 men, others working part-time.
LISTEN HERE 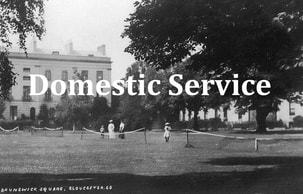 The contribution of women from the Forest of Dean to domestic labour in the nineteenth and twentieth century, mostly outside the Forest, is vast, hidden and largely unreported. It is difficult to statistically assess but it is likely that as many women went into domestic service as men did into coal mining, at least until the Second World War.  Conditions were often bleak and hard, with low pay and few opportunities to return home. Many women who left the Forest returned to marry and have families, but some never did. After the War many middle-class homes continued to employ servants re-designated as domestic help.  The Forest also supplied domestic, catering and laundry staff to work in the colleges and other institutions in Cheltenham, London and the Home Counties. Domestic workers were un-unionised and exploited. Women continued to also carry out most of the domestic work in their family homes throughout the twentieth century.
LISTEN HERE

The Forest has been farmed for its wood for centuries. Wood has been a resource for making ships, iron, paper, tar, charcoal, commercial timber and pit props. In 1924 the Forestry Commission took over management of the woodland from the Crown, and by 1967 they employed 11 staff in the Deputy Surveyors Office, 13 Head Foresters and Foresters, 180 directly employed Forest Workers and in addition, 90 were employed by timber merchants on standing sales and 150 engaged in wood processing in other premises. Wood has been processed in the Forest in various ways; to make plywood and wood products such as tar, and for pit props (and other timbers) used in coal mining. Forest Products (formed in 1927) and Pine End Works, a Lydney plywood factory, produced timber products from local and imported sources. Charcoal, once a family industry declined and it was eventually no longer manufactured commercially in the Forest.
LISTEN HERE 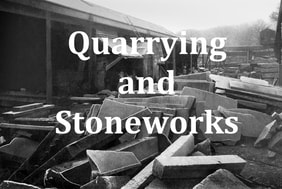 Quarrying had a long tradition in the Forest, producing millstones, lime for mortar and soil, and building stones until displaced by cheaper brick and tile. In 1952 the Forest's quarries employed at least 92 men. The use of the Forest's superior quality stone for prestigious buildings continues to this day. Once, stone was quarried by customary right almost anywhere in the Forest, subject to certain qualifications, customs and payments. The decline of the quarrying industry before the Second World War impacted on the stone works who were increasingly specialising to provide stone for high prestige buildings. The industry continued in a much reduced form after consolidation of smaller companies, through Forest of Dean Stone Firms Ltd. at Cannop (still operating today).
LISTEN HERE 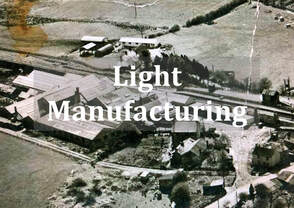 ​The decline in extractive and other heavy industries, and for women a decline in domestic service jobs, saw a need to diversify the area's economic base. In 1938 a Development Association was formed, becoming the Royal Forest of Dean Development Association in 1943. New factories were established at Coleford, Lydney, and Mitcheldean, whilst many people travelled to factories and offices in the Gloucester area. Later in the century the decline of Rank Xerox led Paul Marland MP and the Forest of Dean District Council, led by the late Arthur Cooper, to have the Forest designated as an assisted area and supported the development of small industrial estates in the district. In 1975 the Forest Vale industrial estate on the west side of Cinderford was laid out and 40 businesses had premises there by 1985. Earlier, Fred Watkins had built a factory for repairing boilers at Sling in 1942, later also making machine tools, and by the late 1960s employing 150 people. At Whitecroft the engineering firm of Nash & Morgan was building motor coaches in 1954 and the J. Allen Rubber Co. acquired a new factory in Lydney in 1964. One of the largest employers of women before the War was in Whitecroft. In 1910, the Jarret family began making safety pins. It expanded and became the principal employer of female labour in the area. The workforce rose to 400 people, including many outworkers, before the Second World War. Although manufacturing more than pins and owned by different companies it was always known as the ‘pin factory’.
LISTEN HERE 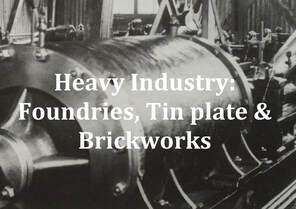 There had been tin plate manufacture in the Forest at Parkend, Lydbrook, Redbrook and Lydney throughout the nineteenth century. This slowly consolidated under the Allaway and Thomas families in Lydney. The Lydney tin plate works closed in 1957. Brick making had become an established Forest industry by the early nineteenth century and expanded after 1838, when the digging of clay and sand was permitted under licence from the Commissioners of Woods. They manufactured fire and ordinary bricks, and many were attached to local ironworks, such as at Dark Hill in 1832. The industry made extensive use of shale from colliery spoil tips. A brick works at Steam Mills used clay from the Trafalgar colliery, later the Princess Royal Colliery Co. near Whitecroft manufactured bricks and in 1923 the Lydney and Crumpmeadow Collieries Co. opened brick works at Broadmoor. This continued into the later twentieth century, particularly in the Cinderford area where the Hawkwell and Broadmoor yards employed 62 people in 1959. Coleford Brick and Tile specialising in hand made bricks and founded in 1925, persists on the site of an old tinplate works.
LISTEN HERE 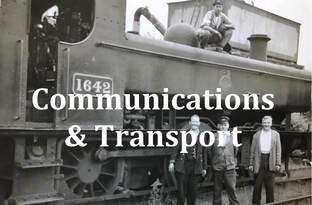 The second half of the twentieth century saw the last days of the intricate Forest railway system that had primarily been established to serve the coal industry but was also put to use as a passenger system. It also carried munitions in the Second World War. The destruction of the old Severn Railway bridge heralded the closure of the majority of the Forest railway lines. The motor transport industry, led by regional companies such as Red and White, began after the First World War and rapidly expanded thereafter. This coincided with the growth of telecommunications. Throughout the twentieth century Postal services remained a vital public service and an important employer. The Forest's vibrant and popular independent newspapers have also provided employment opportunities.
LISTEN HERE 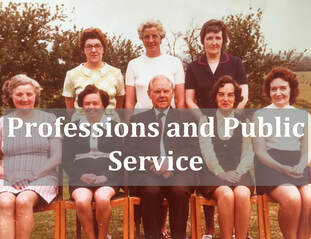 ​The professions have provided important work opportunities in the Forest. From finance to law, there have been professional roles often supporting local industries and business. Teachers were often trained outside the Forest but returned or migrated to the Forest. A strong tradition of training in mining and engineering formed the basis of much college education. Primary care and the Dilke, Lydney and Stowfield hospitals have been important employers of healthcare professionals. The system of conscription from 1939 to 1960 was called National Service (between 1939 and 1948, described as ‘war service’). Forest men served in a variety of service arms, several acquiring families and skills while serving that returned to the Forest with them.
LISTEN HERE 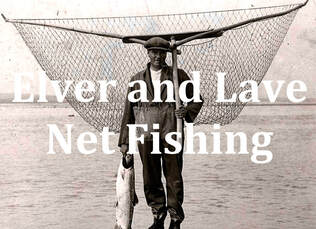 Elver and Salmon fishing, using lave nets and putchers, were important sources of food and additional income for families living in proximity to the rivers Wye and Severn.
LISTEN HERE 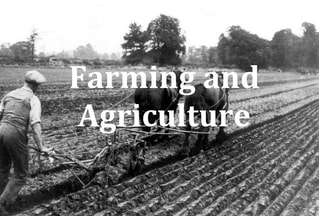 ​The land surrounding the statutory Forest, on the Severn plain and north up to Newent and the westerly borders with Monmouthshire and Herefordshire, have always been rich agricultural land. By the Second World War mechanisation and industrial farming practices had reduced the need for labour. Farms were frequently ‘family’ enterprises expecting children, young adults and women to be actively involved in farm work. Farm workers on larger estates such as Lydney Park were provided with ‘tied’ houses, attached to their employment.
LISTEN HERE 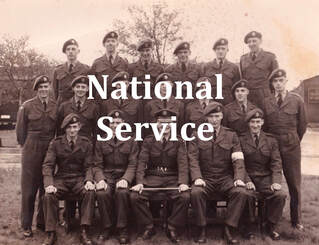 Following the end of the War in June 1945 demobilisation saw many services personnel return to civil employment following the Reinstatement in Civil Employment Act. Britain still had worldwide colonial interests and to retain servicemen the Attlee government passed the National Service Act of 1947. This applied only to men between the age of 17 and 21, requiring them to serve in one of the armed services for an eighteen-month period, extended to two years in 1950. National service ended in 1960. The War and subsequently National Service had a profound effect on men from the Forest, some gaining useful skills in the Royal Engineers and others meeting their wives in Germany.
LISTEN HERE
These categories reflect the lives and occupations of people who contributed to this project and some of the main sources of employment during the Second World War and the last half of the twentieth century. It is not intended to be an exhaustive list of different forms of employment, of which there were very many more than indicated here. If you have any comments or suggestions please contact us.